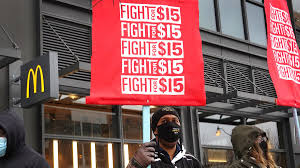 Democrats, since taking control of both chambers of Congress and the Executive Branch, have been pushing for increasing the minimum wage to $15 per hour. The proposed legislation seeks to raise the federal minimum wage (currently being $7.25) to $15 per hour by 2025.

One thing opponents of raising the minimum wage to $15 per hour ought to keep in mind is that in the past raising the minimum wage has had no discernible effect on unemployment. There are several reasons given by economists for why businesses can adjust to a higher minimum wage. The biggest reason is that raising the minimum wage significantly decreases turnover rates, which in turn saves businesses a large sum of money. Less need to seek out and train new workers massively benefits businesses. Another reason is that when millions are getting a raise (not just the workers at one business) the increased income of those workers acts as a stimulus for the economy. People will consume more and therefore benefit businesses and the economy as a whole when they have more income. Another reason is that many businesses can handle a reduction in their profit margins for the sake of paying their workers higher wages. Many businesses could pay their workers more but do not so they can keep profit margins high. Other reasons given by economists include possible negative changes such as reductions in non-wage benefits, cutting of total hours for workers, and increased prices. However, these negative changes are often negligible in their overall impact.

What should perhaps be spoken of more is the importance of labor unions. In Denmark, the average minimum entry level wage is approximately $20 per hour, but Denmark does not have a national minimum wage law. In Denmark, labor unions collectively bargain for their pay and benefits from employers and have those negotiations mediated by the government. Unions are widespread and strong in Denmark, while in the United States unionism has been on the decline for decades. All in all, what can be said in regards to raising the minimum wage is that the free labor market has proven that it is not capable of properly compensating the working class for their labor on its own, but raising the federal minimum wage is not itself the solution to the issue of poverty wages.