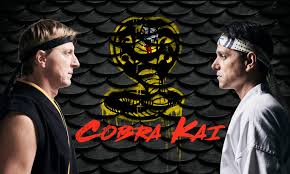 Recently, the first two seasons of Cobra Kai were added to Netflix. This show comes 34 years after The Karate Kid takes place, but it follows the still-prevalent rivalry between Johnny Lawrence and Daniel LaRusso. LaRusso has used his famous crane kick against Lawrence as a marketing tool for his highly successful car dealership. Because of this, Lawrence is constantly reminded of his loss 34 years later. Lawrence starts the show out as a handyman, but after meeting a kid, Miguel, who keeps getting bullied, he decides to teach karate, based on offense, and reopen the controversial dojo, Cobra Kai. Once LaRusso catches wind of Lawrence’s actions, he becomes infuriated due to the bullying he once received from the Cobra Kai kids. However, when LaRusso confronts him about it, Lawrence convinces LaRusso that Cobra Kai has changed for the better and has left its harsher teachings behind. However, conflict ensues when LaRusso unknowingly hires Lawrence’s son, Robby, at his car dealership and sure enough, begins to teach him his version of karate, which is based on self-defense.

Somehow, Lawrence and LaRusso are still rivals throughout the show even after 30 years have passed. There are multiple times when they seem like they are going to reconcile, but then a small misunderstanding ruins it all and causes further conflict to ensue. This show follows the model Barney Stinson from How I Met Your Mother set out, that Johnny Lawrence was a tragic hero and he was the true karate kid. As the main character, Lawrence has many flashbacks of his past life and it shows the struggles Lawrence has had to go through, something the original movie glossed over.

What makes this show so good is that in the All-Valley Karate Tournament at the end of the first season, you do not know who to root for because you learn about Lawrence’s tragic life story. Eventually, Miguel, Lawrence’s student, and Robby, LaRusso’s student, match up in the finals and it is a difficult choice of who to root for. Do you root for the kid who was bullied and showed resemblance to Daniel LaRusso from the first movie, or do you root for Robby Lawrence, the kid who grew up without a father? While the characters and dialogue are subpar and cheesy, the conflict in both seasons is magnificent as you see the development in each of the characters and there is no cold-cut protagonist or antagonist in the first season.

However, this changes in the second season when John Kreese, Lawrence’s sensei in the original movie, returns. Kreese convinces Lawrence he has changed and since Lawrence received a second chance, he tries to give Kreese that same chance. However, Kreese starts to infect Lawrence’s students with the same merciless nonsense that turned Lawrence against Kreese in the first place. Unbeknownst to this, Lawrence keeps Kreese around to infect his students until he finds out what he has been teaching, but it is too late at that point. Kreese has already left his impression on the students which turns friends against friends and leads to vandalism against LaRusso’s new rival dojo of Miagi-Do, in honor of LaRusso’s former teacher Mr. Miagi. This vandalism is one of the larger factors in the all-out and unrealistic brawl at the end of the second season

I would recommend this show to anyone. Although some parts hurt to watch because of how cheesy it is, it is a very humorous show and entraps its watchers, as it does not give you an answer of who the hero is like the original movie does. This has even caused arguments in my house about who the true hero of the show is. The episodes are only about 20 minutes long and there are only 24 episodes between the two seasons, so it can be a quick watch. Be on the lookout for the third season which is being released on Jan. 8 of the new year.