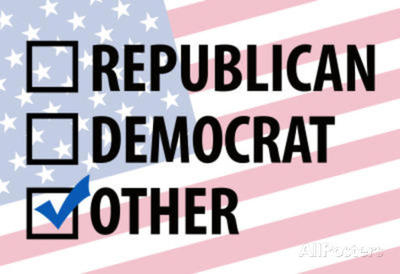 There’s got to be more to the presidential election than Donald Trump and Joe Biden, right? Technically speaking, yes, there are other parties who have presidential candidates that will be on the ballot in Missouri, and many more available as write-ins. And no, this is not going to be an article entirely about Kanye West.

A recent poll from Gallup shows that the American public favors Donald Trump at 42% while Joe Biden is favored at 47%. Meanwhile a poll from CNBC claims that half of voters in six key swing states view both Trump and Biden as being mentally unfit for office. This lack of support for both parties suggests the possible surge of a third party. However, data from RealClearPolitics estimates that only 9.5% of voters are undecided or considering voting for a third party. Obviously, voting for a third party candidate is not feasible, at least at this time, in terms of winning an election, but, if a party receives 5% of the popular vote, it will receive millions in funding from the federal government in the next election. Here are the parties which have a chance to get that 5%.

One of the two largest parties outside of the two-party system, the Green Party is a grassroots-funded left-wing party. They have been scorned for decades by mainstream media because of the narrative that Green Party votes in swing states were responsible for the elections of George W. Bush and Donald Trump, respectively. Data from 2016 exit polls show that 61% of Green Party voters would have stayed home instead of voting for Democrats. This time around, the Green Party is running on an ecosocialist platform around Howie Hawkins and Angela Walker. Hawkins, a retired Teamster, coined the term “Green New Deal,” a policy adopted by Bernie Sanders nearly a decade after Hawkins began using it. Many of his policies are similar to that of Sanders but are more to the left. Some of his proposals include: Medicare for All, an Ecosocialist Green New Deal, decriminalization of all drugs, legalization of cannabis, direct community control over policing, a 75% cut to military spending, nuclear arsenal reduction, ending mass surveillance, and dozens of other policies. His running mate, Angela Walker, is another union truck driver and community activist like Hawkins. With the nominations of the Green Party and Socialist Party USA, Hawkins/Walker is a strong left-wing choice.

The other well known third party, the Libertarians, are a right-wing party in favor of free market capitalism and reduced government presence in the lives of Americans. They have nominated Jo Jorgensen, a professor of psychology at Clemson, for president in 2020. They are, like the Green Party, in favor of drug decriminalization and the decriminalization of consensual sex work. They also support some measures to limit the power of police. The Libertarian Party’s solution to many of the issues facing the country today such as climate change, America’s broken healthcare system, and racial inequities, is to make the private market economy more free and therefore people more free. Their stance on foreign policy is considerably more isolationist than that of the Democrats or Republicans.

The far-right Constitution Party runs on a strongly originalist and literal interpretation of the American Constitution. They oppose Social Security, the reality of climate change, and favor much stricter enforcement of immigration laws. The Constitution Party is running Don Blankenship, a former CEO of Massey Energy, for president this year and has limited ballot access. Moment of Controversy: Blankenship spent a year in prison for disregarding a safety regulation after an explosion killed 29 men at his mine.

The Party for Socialism and Liberation (PSL) is running on a platform of Marxism-Leninism and is a budding left-wing party in the U.S. They are filling the place in discourse previously occupied by Communist Party USA (CPUSA), which has not run a presidential candidate in decades. PSL’s candidate for 2020 is Gloria La Riva. The Party has ballot access in only a handful of states. Moment of Controversy: Gloria La Riva and the PSL have expressed sympathy for authoritarian nations such as Cuba, China, and even North Korea.

Kanye West’s Birthday Party is another third party choice. While the name may sound like a joke, it is serious (well, sort of). While having very few real positions, Kanye is very adamant about the theocratic nature of his beliefs. His emphasis on how present religion should be in the lives of all Americans is winning him a little bit of support from religious right-wing voters. He has ballot access in 12 states. Moment of Controversy: While there are innumerable bizarre statements Kanye has made, the best is: “…my greatest pain in life is that I will never be able to see myself perform live.”

Brock Pierce is running as an Independent. As the head of the Bitcoin Foundation, Pierce has worked tirelessly to restore the pristine reputation of Bitcoin over the last few years. With semi-remembered rapper Akon managing his campaign, he is all but set for victory in November. Moment of Controversy: (Could not be included due to risk of libel lawsuit.)